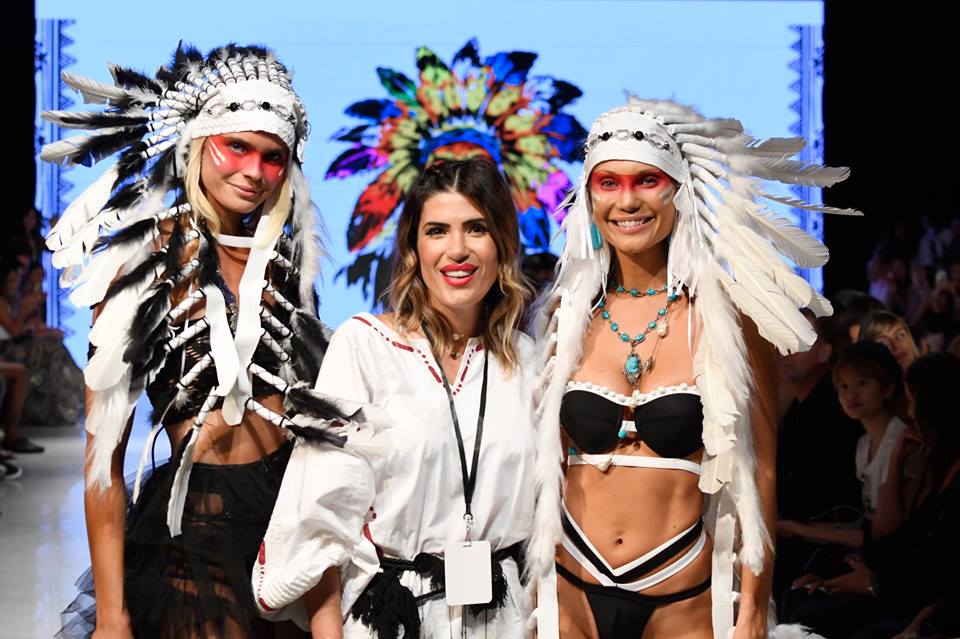 Silvia Ulson’s passion for Brazil is what drives the São Paulo-based stylist’s creations in every international fashion show she is invited to. From the lacework crafted by embroiderers in northeastern Brazil to Carmen Miranda’s colors and stories, Ulson’s collections come to life through these characters, showing off the best of her beloved homeland.

The stylist’s experience in the São Paulo metropolitan area allowed her to create her new collection in honor of the indigenous peoples, which will soon be shown at the 2018 Miami Swim Week. Taking place in the United States, the Miami Swim Week is one of the most important swimwear events in the world and has designers from across the globe.

Currently the Krukutu Village gathers about 47 families and around 300 people, and their chief is Karaí de Oliveira.

Silvia Ulson and her team spent a few days at the village, where they were able to get a grasp of the lifestyle of those peoples and their struggle to keep their traditions alive. They also heard the residents’ stories and participated in their ceremonies. The locals showed Silvia their art through decorative objects and body accessories such as earrings, necklaces, and clothes. They would gather every day at sunset to celebrate by singing, dancing, and praying around a bonfire.

The fashion designer was definitely impressed by the colors they use to create their traditional clothing, including the shapes and strokes as well as their body painting for the rituals. Using all of the references from her experience and doing a thorough research for months on Brazilian indigenous peoples, Silvia’s new collection will be revealed to the world in Miami on July 12th.

Ajagunã, or “strong warrior” in English, is the name Silvia named her collection as a homage to the indigenous peoples she met–and the translation seems to fit well. The word is part of the Tupi linguistic family, which includes several indigenous languages (being Guarani the biggest).

Indigenous peoples appreciate the human body, which was an important reference for Silvia during the development of her swimsuits and bikinis: their shapes resemble the indigenous strokes and their hot colors forecast an unforgettable 2019 Summer full of Brazilian references.

Each item has a story, a meaning, and a goal. The stylist has studied each drawing and their indigenous parameters for years across Brazilian tribes and villages represented in pictures, books, history books, and experiences.

The accessories will also reflect those concepts and take the strength of mother nature to the runway through the pearls developed by Rio de Janeiro-based designer Fernanda Lynch, who is famous for an impeccable work with precious gemstones.

The soundtrack is by DJ Trotter / Royal Soul Records, who has worked at fashion shows around the world and is always responsible for making Ulson’s projects even more special. The internationally-known DJ’s set is called “Tribos,” clearly named after the project’s theme.